By Examsavvy March 10, 2015
Hope you know that, Google owned Android operating system is the most wanted stuff in the market. Though there are ample of operating systems have been introduced into the mobile sector like Tizen by Samsung, Windows 8.1 or 10 by Microsoft, and so many related tries, Android certainly beats the competition in effective rates. This might be due to satisfying the user's in all their expectations in real time operations. The play store (possess with equal number of apps as well), gives them a big difference and boost in the sector indeed. Though Android operating systems provide better realization for our day to day life, they have variations in version. Thanks to the absolute evolution from Android Ginger Bread v2.3 to the latest Android Lollipop v5.1. 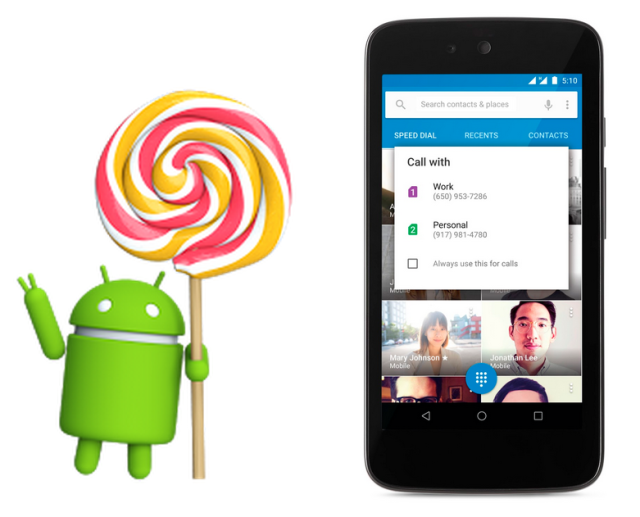 Google Launched Android L 5.1 Today:
Yes, getting update from the Internet giant will really boost your device up in various forms. Today, Google announced the release of Android Lollipop OS v5.1 to various compatible devices around the world. Hope the Nexus device would be the first to experience the latest version Android OS. Though there are no official announcement of any specific device names, instictions suggest that, the latest Smartphone like Motorola Nexus 6 and HTC Nexus 9 could be the few devices that are passing the criteria for Android L update.
Features with Android Lollipop v5.1:
There is huge expectations growing over the latest mobile OS from the Internet giant. Some of the notable features implemented with this v5.1 Android L OS is as follows.
This update certainly serves better for the multiple SIM enabled devices for sure. It includes HD voice support and advanced security control over the multiple SIM devices. Also specifically concerned about the ultra affordable Android One devices across the globe.(The Android One is the official program launched & successfully driven by Google Inc).
Android one devices experienced their Android Lollipop update just a few weeks ago, this update would really be interesting for the aspirants of Android One devices. Get ready Android One folks, in fact your device could also be the first to taste the Android L v5.1, (as per the promise from Internet giant right from the launch).
New Quick Settings Options:
There are few newbie techniques are implemented with the latest Android L v5.1 OS. Interestingly it's now the Quick Settings Options, using which you can effectively take control over the paired Bluetooth devices. The same move is also impact with the joining of any new WiFi networks.
Enjoy the latest version of the Android L version 5.1 and pray as well to get notification about the same in your device in real time manner. Meanwhile, Google announced the additional list of mobiles to get the Android L 5.1 OS are, Nexus 5, Nexus 7 and Nexus 10 indeed.