Think of E-mail and Gmail comes to your mind? Well, it had not been this way always. Ask your father or uncles and they would still be using Hotmail. Teenagers of the late 90’s would know this pioneer in E-mail services too. It is back now, with a new avatar and chic looks. One of the world’s first webmail services, Hotmail was founded in 1996 by Sabeer Bhatia and Jack Smith in Mountain View, California. In 1997, Microsoft acquired Hotmail for about $400 million and launched MSN Hotmail, which was later renamed as Windows Live Hotmail. The last version of this Webmail was released in 2011 and awaits future updates. Windows Live Hotmail is being used by about 360 million users and comes in 36 different languages. Recently Hotmail was replaced with the page, Outlook.com and as the name says, the site resembles Microsoft Outlook. Outlook.com also features Metro Design Language, unlimited storage, Ajax, Calendar, SkyDrive, People and Skype.

In the year 1999, Hotmail faced severe security problems, with hackers revealing that anybody can log into a hotmail account with the password ‘eh’. This incident was widespread and made hotmail very infamous. In 2011, another security hitch was discovered. Around this time, hotmail became very unpopular. Thousands of hackers got access to numerous accounts and millions of accounts were hacked. Competition to Hotmail did not appear till 2004, when Google announced Gmail. Gmail featured greater storage, speed and better interface. Hence the mail service with advanced features really pushed Hotmail to improve their interface and usability better. 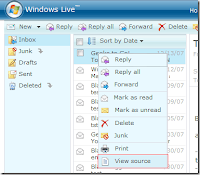 When Hotmail was re-launched as Windows Live Hotmail, it was released as a beta version to some testers. The new interface was made from scratch and was a vast improvement from Hotmail by being faster, simpler and safer. Slowly updates were released to the users on better features such as more storage space, better interface and better experience. Signing in and access speeds were increased and user feedback was used to make it better.

Further, more themes and Instant Messaging made this web-mail service more sought after. Users could exchange IMs with their contacts on Windows Live Messenger. A new roll-out called “re-invented Hotmail” had Instant Actions, scheduled sweep and other categories.

Last year, Outlook.com made its first public appearance. Windows Live Hotmail users were able to upgrade to/downgrade from it. Since February, Hotmail users were forced to move to Outlook.com but still have the option of taking up either xxx@outlook.com or retain their xxx@hotmail.com addresses. As of May this year, 400 million users actively use Outlook.com. Aren’t you one of them? Sign up today and feel the difference!